What’s With the Printing Points in the Open Computer Labs?


Printing in GRCC’s open computer labs is paid for out of the student Technology Fee, which also pays for the computers, software, network, etc. The tech fee is overseen by a Tech Fee Committee made up of students and staff. The students on the committee are either student government reps or students appointed by student government. The tech fee pays for all the printing in the open labs, and the rest of the money is spent on technology for the students and staffing to support the technology. In 2011-2012, $3.95 of a student’s $60 tech fee went to printing while the rest went towards technology.

Not too many years ago, students had unlimited printing. The amount of waste was incredible—thousands of pages were printed and abandoned at the printers. So the Tech Fee Committee purchased the print release system. The committee wanted to set a maximum amount of printing so that most students would be able to print everything that they needed for school, but there would be a top limit. With the upper limit set at 500 points, most students never come anywhere near to using all their points. That was the committee’s intent—that most students would be able to print whatever they needed to and not worry about running out of printing points. 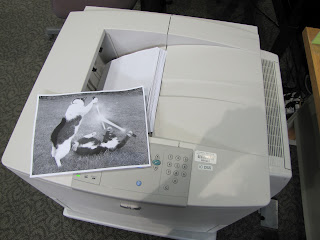 200 pages left at the printer (cats with lightsabers; must be a continuing ed class)


The Cap on Printing Points

Students usually think of the 500 points as the amount of printing they are entitled to rather than an upper limit. Sometimes they feel like they are losing value if they don’t use up their all their points, as if they are losing the tech fee money that they paid. In reality, if people print less, then more money is spent on technology (such as more computers or more or better software).

At graduation time the last 2 years, the wasteful printing has been beyond anything we have ever seen before. Thousands and thousands of pages were printed and left at the printers. Students had accumulated several thousand points, and they seemed to feel the need to use them all up before leaving. One student printed 20 posters—2000 points, or $200 worth of printing—and left them at the poster printer. Aside from the inherent waste of resources, they just hurt the GRCC student community. That is $200, wasted by one student in one sitting, that can’t be spent on technology.

To try to address that kind of abuse, at the end of Spring 2012 it was decided to cap the maximum number of points that a student could accumulate. The cap was set at 1000 points, or 2 full quarters of printing. Points still roll over from quarter to quarter, but the total won’t go over 1000 points. For most students this won’t make any difference. If they need to print a lot for school, they don’t roll over enough points to worry about hitting the cap. If they don’t print much, they’ll hit the cap, but still have 2 full quarters worth of printing available to them if they need it.